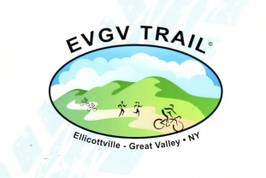 As is says on our Home page, the Trail sustained a lot of damage over the winter.  Stumps remained and sections of the trail washed away.

To respond to the damage, the committee has estimated they would need to raise $25,000 to repair the damage and prepare the trail for the coming winter. The group started the 2020 Summer/Fall Challenge to raise the funds on Facebook and Go Fund Me. Donations are also coming in from the Cattaraugus County Community Foundation website. Several local contractors have stepped forward to assist in the work. JD Northrup Construction, Bill Steinbroner, and Phil Vogt have donated hours, workers and equipment to clear stumps and grade the drainage. Engineer Mark Alianello says the path will have to be seeded and covered with straw to protect the seed. These types of “in-kind” donations are invaluable to the fundraising efforts.

The stumps are gone and new grading in place.

The Ellicottville Great Valley Recreational Trail Committee (EVGV Trail) announced recently that Lisa Hunt has joined the Committee to coordinate fundraising for the Trail.  Ms. Hunt brings a wealth of experience in Marketing and Sales to the Committee. Her career started as Marketing Coordinator for Smith & Nephew in Medina, New York, and later as a Neuroscience Specialist for Abbott Laboratories of Chicago Il. She then moved to industrial chemical Marketing at Sasol Performance Chemicals and over the years became North American Sales Manager.  For the last several years, Ms. Hunt was Sales and Business Development Manager USA for Alpha Wax BV.  Though she lives in Williamsville, she is a part time Ellicottville resident and enjoys the activities and ambiance here in Cattaraugus County.  She also enjoys hiking and skiing at Holiday Valley.

It was that Holiday Valley connection that resulted in her joining the EVGV Trail Committee.

She and her husband were on the Yodeler sun deck après ski one beautiful March day when they met and struck up a conversation with Matt McAndrew from the Committee and learned about the trail. While her career has not focused on fundraising, she sees there are crossover skills and is excited to use those skills to help move the progress of the trail forward.  The marketer is aware of the challenge presented in building something that does not exist. “There are quite a few people, even folks who come to Ellicottville frequently, who aren’t familiar with this trail, or the peaceful arboretum or some of the other wonderful municipal projects that we have.” Hunt acknowledges raising public awareness of the Trail may be a challenge and believes “Getting the word out is the best place to start.”

Recently the Southern Tier Trail announced plans to create a trail using the 27-mile Baltimore & Ohio Railroad corridor between Buffalo and Hinsdale.  The planned route will bypass downtown Ellicottville. But the EVGV committee is proposing joining the two trails through the village of Ellicottville to bring hikers and bikers into town. “Ellicottville is a wonderful town, and it has so much to offer, and to link into the Southern Tier Trail has amazing value for the community.”

The Trail Committee has been busy applying for various grants from state and private foundations, including the Ralph C. Wilson Foundation and the Blue Cross Blue Shield Foundation.  However, both foundations announced they were committing their grant money to Covid-19 relief organizations with the onset of the pandemic.   Corporate grants and individual donations will be needed to help the EVGV trail be completed and connected.  It is also disappointing that this year’s annual June fundraiser event needed to be postponed due to the pandemic because community support is so greatly appreciated.

The Ellicottville Great Valley Recreational Trail Committee was founded eight years ago to create a recreational trail between various points in Ellicottville and Great Valley.  The ambitious plan is to establish a walking, jogging, and biking path totaling 15 miles between the two communities. Recently the Committee completed the preliminary clearing and grading on the part of the Trail between Town Center and the Tim Horton’s on 219.  Stump clearing and seeding need to be done before winter sets in to prevent damage to the cleared section. If you would like to support the Trail, donations can be made at EVGVTRAIL.ORG

Check out this great video.  It shows the problem with students walking along Rt. 219 to Ellicottville Central School without a sidewalk.  The video shows the proposed crosswalk that leads to the anticipated trail along the east, and safer, side of Rt.219